Share your chapter news with sisters from across the state. Submit items to the state webmaster using this link. Submissions can be photos, articles or even links to posted videos.

There will be 200 books delivered to Robert Packet Hospital Birthing Center where they will be given out to families of newborns. Each book has a label on it as seen in the photo and is accompanied with a note to the families. 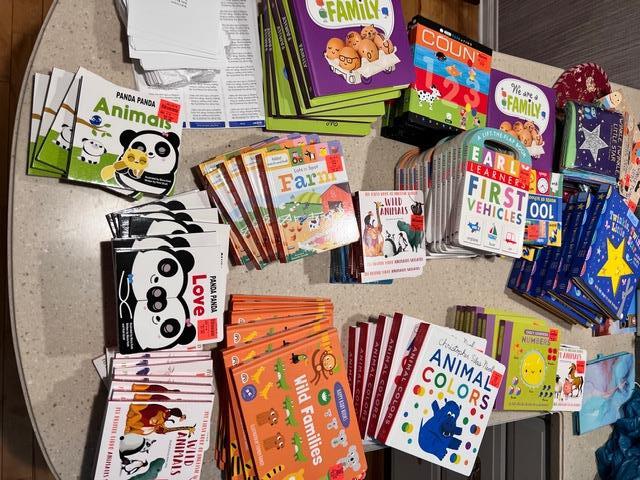 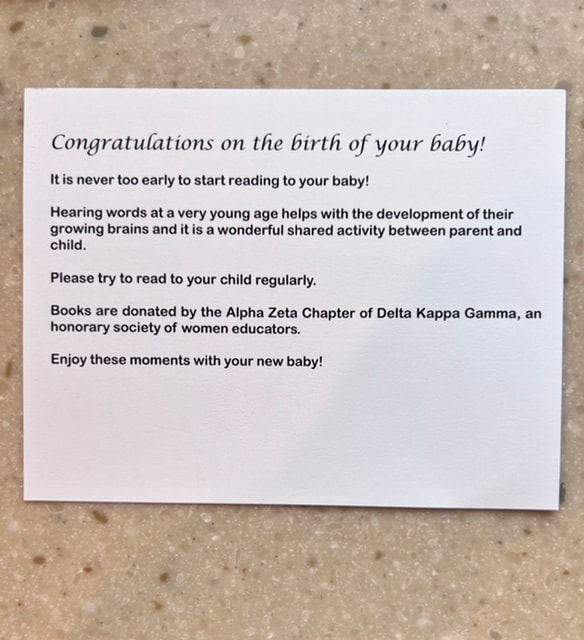 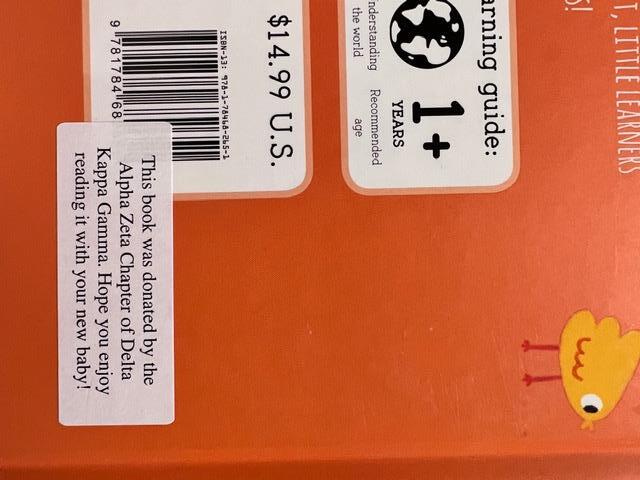 During this time of giving to less fortunate people, I’m happy to inform you the following good news what Beta Xi will be doing to help. Since July 2022, Jan Flinchbaugh made and sold her beautiful quilted pieces.  Jan gave the profits of her sales to Beta Xi so we could give a nice donation to three charities that benefit children. Donations were made to $1000 to CVIM (Centre Volunteers in Medicine –State College) who provides free medical and dental appointments, $1000.00 to the YMCA Back Pack Program (provides food for weekend to children in need by filling back packs to take home) and $500.00 to the State College Food. Jan Flinchbaugh helped pick the three charities we’re donating to with Beta Xi Executive Board approval.  We all owe Jan Flinchbaugh a big thank you for her talents, kindness, and generous donations of making such beautiful quilted items for us to sell to help children in our area.

Chi chapter has been busy this fall! We kicked off the new biennium with a program from Joanne Caster talking about her personal experiences at the border. Our members acted on what they learned to support immigrant students at King Elementary School in the School District of Lancaster. Through donations 84 students will receive a hat, pair of gloves and pack of socks along with a handwritten note in their native language from our sisters. At our second meeting, Brittany Bertoli and Sue Allen shared how they implemented their Chi Visionary award to purchase ESL books to diversify a classroom library and to purchase STEM books for a lending library. At the meeting sisters participated in four STEM stations inspired by the books. Our next project will be to create STEM kits to accompany books that will be donated to teachers in our community. Our chapter has also been busy with social events. We gathered at Long’s Park for a Celtic band concert in August where we hosted our Grant in Aid recipient and her husband. We met at Copper Hill Public House in October for a social dinner and our book club kicked off with the first of four books we will read this year in November. We also welcomed four new chapter members this fall.

​The Tau Chapter of DKG met on July 14 at the Cafe in Wilkes Barre. The summer social featured a demonstration on how to put together a charcuterie board. Members not only observed how to put a enticing board together but also got to taste the finished product. A luncheon followed.

The Tau Chapter of DKG marked its 75th birthday with a luncheon and a program.  The luncheon took place at the Woodlands in Wilkes Barre, PA.

​A slide show, with comments, depicted Tau through the decades. This included photos of the first president and service projects undertaken through the years.
A tree covered, with red roses, was on display in memory of deceased presidents and members along with Tau memorabilia.
Guest speaker was Ms Cindy Reynolds. 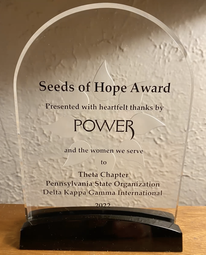 ​Theta chapter was recognized by their community with a Power Award! Check on this link in order to view their presentation. Use this passcode to view the presentation: 6vw=xYvT

Loretta Baran got to meet and speak with Gov. Wolf while he was in Erie for a press conference at the ExpERIEnce Children's Museum. The museum staff had her come in early as Thursdays at 11 is her regular time for Storytime. She helped with a science experiment that was done with some 1st graders. The staff wanted the Governor to see one of the things that are happening at the Museum. Monies have already been allocated toward the construction which will begin in March on a 2-story addition to the Museum.
She thanked the Governor for his support of PA teachers and asked if he can get the Legislature to move on a COLA for those who have been retired for a number of years. Loretta is pictured below with Governor Wolf and area legislators. In 1979, to commemorate the Society’s 50th anniversary, the Golden Gift Fund was established. It was
generously funded by Dr. Eula Lee Carter, a Texas State Honorary Founder. The Fund’s purpose is to
provide leadership training, and in the past, it also allotted special stipends for research and professional
development.
Up until 2019, the leadership training was called the Leadership Management Seminar, and thirty
members were selected initially for a two-week annual seminar that later became a biennial event held
in even-numbered years during the months of June and/or July.
This year’s seminar was called DKG Ignite: Leaders Empowering Leaders, and twenty members were
selected for an intensive one-week training. Due to Covid-19, the 2020 DKG Ignite was postponed until
2022, and it was scheduled from Sunday, June 26 th , until Saturday, July 2 nd . Marcie Erickson, Beta
Epsilon, participated in the redesigned seminar that used blind scoring to review the revamped
application that included a written narrative and a video recording.
The third goal of the Society’s 2015-2025 Strategic Plan is “Develop Leaders,” and DKG Ignite focuses on
the plan’s following objectives: To sustain the Leadership Management Seminar, major changes had to occur, and as described, changes
occurred in the application process and the length of the seminar, in addition to providing a curriculum
designed for the 21 st century leader. But, as with many of the Leadership Management Seminars, DKG
Ignite was held in coordination with the McCombs School of Business at the University of Texas at
Austin.
On the dkg.org home page, listed under the Deadlines section, the next DKG Ignite application will be
made available July 1, 2023, and it will be due December 15, 2023. If interested, keep a close watch on
the dkg.org website, but expect changes to the website itself in the coming months (a site map was
shared at the 2022 New Orleans International Convention) and to the Seminar. It may change in name
again, and it will be administered by the Leadership Development Committee. These changes, Bundle 3:
Golden Gift Fund and Leadership Development Committees Proposals, were voted upon the
membership at the 2022 International Convention and will soon be communicated by International. ​The Beta Rho Chapter of the Delta Kappa Gamma Society International (DKG) recently held its October meeting on Zoom due to continued safety concerns of many members.  During the meeting the Beta Rho Achievement Award was presented virtually.  Not the best way to present such a distinguished award as this is and so as a result, the committee chair Janet Small, Chapter President Jeanette Saulo and member Cindy Reynolds met the recipient at a later date at Bingham’s Restaurant for lunch and the in-person presentation.

The purpose of the Beta Rho Achievement Award is to recognize and honor a member who has given distinguished and outstanding service to Beta Rho Chapter and has promoted the purposes and policies of DKG.  This year’s recipient is Sheri Wolfe. Beta Rho Chapter of The Delta Kappa Gamma Society International (DKG) presents its Achievement Award to a worthy member. Sheri Wolfe was this year’s recipient of the award but because the chapter meeting was a Zoom meeting, the actual presentation was only announced. The week following the announcement, a few members gathered at Bingham’s Restaurant to make the presentation and share in the celebration of the award. Pictured left to right are recipient Sheri Wolfe, Beta Rho Chapter President Jeanette Saulo and committee chair Janet Small. Member Cindy Reynolds also joined them for the luncheon presentation.

​The newly renovated Warren County Career Center in Warren,PA, was the location for the Delta Kappa Gamma Alpha Mu chapter meeting on April 28, 2022.  Mr. James Evers, Director of the WCCC, conducted a tour of the school explaining the twelve vocational programs currently in place and discussing potential future programs.  The original building was constructed in 1970, an annex was added in 2000, and the new project was completed in 2020.  A delicious luncheon of sandwiches, fresh fruit and vegetables, and desserts was prepared by the Food Production and Management students for the members to enjoy.
Pictured left to right, DKG members, Rita Cecco, Sue Yovich, WCCC Director, Jim Evers, and DKG members, Tanya Swanson and Rhonda Thompson. 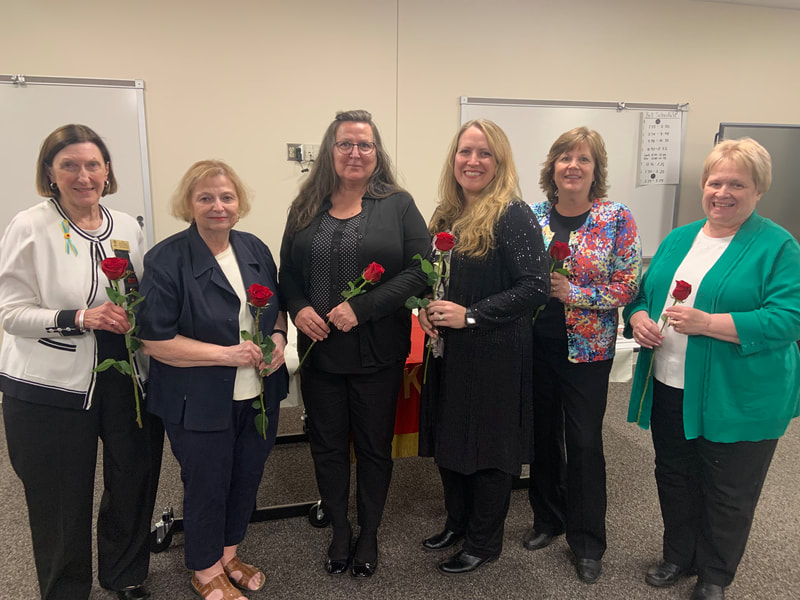 The Projects Committee coordinated a socks, mittens, and gloves drive for the youth of Bedford County and the Bedford County Children and Youth Agency will distribute the items.  Enough items were collected that the Everett Area Middle School’s Clothing Closet also received two bags of socks, mitten, and gloves.

Fabric artist and instructor, Nancy Hershberger, was the guest speaker for the meeting. She talked about her journey to becoming an art quilter and shared how she creates with fabric, thread with little bits of inks, acrylics, and oils.

The Ways and Means Committee held its annual basket/gift donation to raise money for the Convention Fund which helps offset costs for members attending State Convention.

Also in December, as a social activity, members attended the Bedford County Players’ production of Nuncrackers:  The Nunsense Christmas Musical and enjoyed dinner afterward.
Alpha Sigma News
A member of Alpha Sigma, Mary K Davis, has been elected PA PASR Vice-President for a two-year term beginning January 1, 2022.  Interestingly enough, the Immediate Past President is Judy Schaffer. So, we have two distinguished DKG Sisters serving on PASR. As of January 1, 2022, our own PASR Butler Chapter member, Mary K Davis will serve as state PASR Vice-President for a two-year term. I took the attached photo at the 2021 PASR House of Delegates in Lancaster, PA at Eden Resorts. The election for the new state officers was held on Tuesday, Oct. 5 at the Final Plenary Session. The officers were then sworn in and will take office on January 1. The new officers are, from left to right in the photo: Bill Neugebauer, President; Gary Parker who is a past president and conducted the installation; Russell Diesinger, President-elect (pronounced with long e); Mary K Davis, Vice-President; and Judy Schaffer, Immediate Past President. Currently, Mary K is our Region 8 Director, so she will have to resign from that position, leaving it vacant since there is no director-elect. There is a great need (!!!) for more local members to step forward to take leadership roles, both at the local level where we have no president-elect, and at the Region 8 level.

Miracle League sponsors baseball for special needs children at Chrin Park Easton. This event was held at Bicentennial Park in East Allen Township. We filled over 175 ghostly treat bags. There was also a pumpkin carving contest and guess what - We Won!!! It was so gratifying to see their big Halloween smiles!!!
Visitors